Got a question? Add it to the comments below.

We try to explain that here. The tl;dr version is we’re always evolving as musicians, as performers, and as people. The name “Open Beta” really exemplifies that feeling of always evolving and improving.

What kind of music do you play?

Whatever comes to mind, really. The three of us have our roots in Irish music, mainly. We all met and started playing together at open seisiuns in and around Phoenix, AZ.  You’ll definitely hear an Irish influence in much of our work. We’ve branched out a bit, though. We’re aiming at a wider audience, so we’ve been adding bits of Peter Gabriel, U2, The Wonderstuffs, Jonathan Coulton…We like to show off our own individual (and frequently geeky) roots, and are working on original material as well.  And as always, we’d love to hear about the stuff YOU like, and absolutely take suggestions seriously!

Are you going to record an album?

We actually have one! You can pick it up at one of our performances. E-sales are coming soon!

Are you going to record ANOTHER album? We want more!

We get that a lot. Short answer: Yes. Longer answer: We’re working on rearranging some existing pieces, and writing some new material. Also, as it turns out, recording, mixing, and producing an album costs money. (Who knew?) So we don’t know when, precisely, although we’re making opening moves now. We’ll make sure you hear all the details, as soon as we have any to hear. In the mean time, we’re keeping our main focus on our live performances, hoping to generate revenue so we can do all the other stuff you want us to do.

You used to be “Talk a Little Treason”, right? How did you get your old name?

Ever see the film “The Quiet Man”? John Wayne, Maureen O’Hara, set in early 20th century Ireland? There’s a scene where one of the supporting characters is excusing himself to go join his buddies for some conversation and a few pints. “Now if you’ll excuse me,” he says, “me comrades and I are gonna go and…talk a little treason.”

For years, Paul and Brian used that expression as private slang for discussing putting a band together. So when they finally got around to doing so, it seemed a natural choice. There were others… 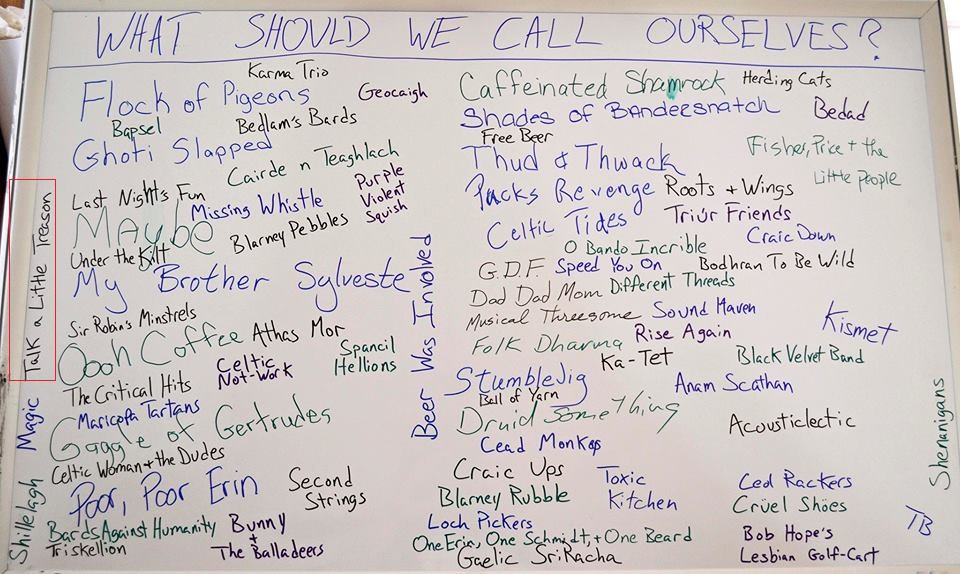 …but that was the one that stuck.

Seriously, why “Talk A Little Treason” ?

We wanted to end up on a list somewhere. No such thing as bad publicity, right?