Yeah, we know, it’s been a while. There’s been some behind-the-scenes changes here at Open Beta. We’re getting back into the swing of things, though. Yes, we know we owe you a post on the release of our first album, back in November, [glares at Brian] and we’ll get into that soon, but there’s some current stuff that bears mentioning too, and we figure we’ll get to that and then get caught up.

So, we played Phoenix First Friday at the Irish Cultural Center back in April. Good times, good fun…and a little weird. It’s a great venue with a great sound, awesome people, a very appreciative audience, and a taco truck. Yeah.  It’d also been a while since any of us had walked in those doors. Erin wanted to talk a bit about that.

When I walked onto the ICC grounds Friday late afternoon, it was a surreal feeling.  I’ve not set foot there since they were building the second section, more than a decade ago. 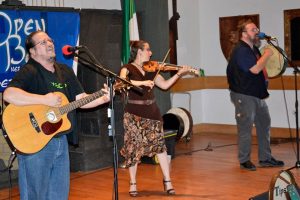 But with that surreal feeling came a feeling of nostalgia, of returning home, somewhere warm and comforting.  Then the music started.  That was coming Home.  That was amazing.  The audience rode the same high we did on stage.  There aren’t words to describe what that felt like.  It was humbling, it was uplifting, and I definitely want to do it again.  We even helped out at the last minute with a dramatic reading, sneaking in a tune or two and some trad songs that I’ve not done in… well, in a long time.  I definitely look forward to more of this!

We played First Friday at the ICC again in May, and will be going back in June…at more or less the same time we’re booked to play at Phoenix Comic Con.

June is going to be busy.

Check out our Bookings page for dates and times, and check back with us here, there’s doin’s  a-transpiring!

That's crazy. Let me know how that turns out.