Welcome back, friends and neighbors! June has been a busy month for us. Let’s get right to the post-game show.

We started the month big. Really big. Phoenix Comic Con big. We played Friday morning on the Adams Street Stage, as they literally assembled the stage around us. It was hot, it was bright, and it was perhaps the first time we’d ever played for both Loki AND Pikachu. This was kind of a milestone gig for us; we’ve been using Comic Con to describe our target demographic for well over a year, now. And here we were, playing our hearts out, the opening act! 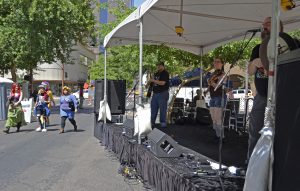 It was weird, though. There were thousands of people there, a seemingly endless parade of geeks and onlookers. These were our people, OUR audience, and they were all so very excited. So many things to do and to see, panels to attend, games to play, celebrities to meet, cosplayers to admire…and us. Our particular corner of the con felt oddly small. Factor in the Phoenix heat, and it was a little hard to grab and hold on to the audience.

Friday evening, we changed gears and rolled up the street to the Irish Cultural Center, where we played for their First Friday 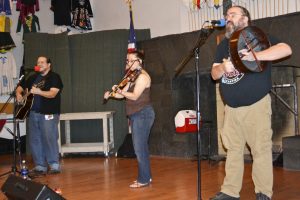 extravaganza. (Was it an extravaganza? Or was it a shindig? Tough to say.) This was more in our comfort zone, familiar faces, familiar turf, and blessed air conditioning. We try to tailor our sets to match our audience, so we played more heavily towards the Irish part of our repertoire here than at the convention. We were already a little wiped out from the day, so it was a blessing that this gig was more relaxed. During a break, someone jokingly asked where all of our usual fans were. Brian wearily pointed south, towards Comic Con. In one day, we’d played in two very different worlds. 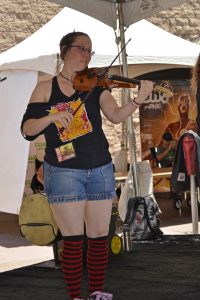 Sunday morning, back to Comic Con. The stage was already in place, the sound guy knew us from Friday, and the heat was more sweltering than blistering. We had some people stop for a song or two, we had some of the folks running nearby booths tell us that they loved our show, we handed out a few hundred flyers with our information. Oh, and two of our favorite fans got engaged on our stage! Coolest thing that happened all weekend. 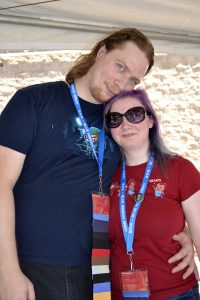 (Congrats, Gabby & Phil! Come talk to us when you’re ready to plan the wedding; we’re all ordained ministers, you know…) We packed it in and headed for home.

The next weekend, we were back to the Irish Cultural Center for their annual Bloomin’ Beer Fest! Commemorating famed Irish author James Joyce and his novel Ulysses, this gig featured food, beer tasting, and some darned fine music. 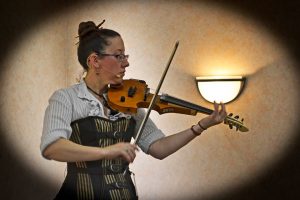 (That’d be us.) There was a great crowd to play for, a fine stage in a neat little hall. All this, and free beer as well? Geez, this is the best job in the world. We had a blast, just like we usually do playing at the ICC. Look for us here in the future, when they resume their First Friday celebrations.

Third weekend was a weekend off, for a wonder. Paul and Erin did some projects around the house, spent time with the kids. Brian worked on launching his new business, JourneyFrog Audio Services. He’ll talk more about that soon, probably on his own site. We’ll give you the link, so long as he behaves himself. Never can tell with drummers, you know.

Last weekend in June, this past weekend? We were invited to play at Leprecon 42 in Phoenix. This is a long-running, fan-driven, sci-fi/fantasy convention. 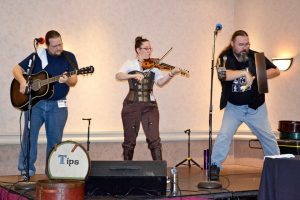 Smaller than PCC, a LOT smaller, but that just served to make it a more intimate experience. We performed on Friday night for maybe a dozen people…but WOW, were they into our stuff. We made some new friends almost immediately. Saturday, we were invited to host a panel, “Performing for Geeks”. We were a little nonplussed; should we talk about being geeks AND performers? Or performing for a geek audience? Or something else? Some of us (looking at you, Brian) had never even ATTENDED a con panel, let alone hosted one. So we staged a small mutiny. With the enthusiastic agreement of our hosts, we moved the panel to the hotel bar. Drinks flowed, 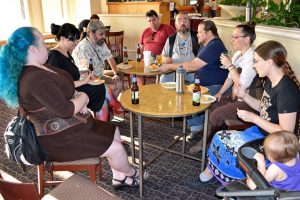 merriment ensued, and we made more new friends. Then, back to the stage we went for another performance. Double the size crowd, even more energy, people singing and clapping and even dancing along. We wrapped up the weekend feeling like we had found our people, or at least been adopted into the tribe. We’d love to come back again next year.

So that was June, for us. A lot of work, a lot of shows. New connections, new beginnings, and a whole lot of music. The next couple of months should be fairly interesting, as we regroup and start planning out our next steps. We’d love it if you joined us for the ride!

Holy cow, we have a blog!