When, in the course of human events… nah, too big.

Fourscore and fourteen weeks ago, our Forefathers flopped forth their…NO!

Ask not what Open Beta can do for you….ugh.

This is hard. We’ve been busy, and so we’ve been shite about updating this blog. It’s so easy to get caught up in what’s right in front of us. And wow, has there been a LOT in front of us. Brian’s been neck-deep in school, Paul and Erin have both experienced some upheaval in their day jobs, all of our personal lives have experienced some growth, (with accompanying growing pains,) and it’s really easy to get lost in the moment and lose track of some of the important details.

Like the booking we agonized over for a week. We need the exposure, we need to expand the fan base, and good Lord do we need the money. So simple choice, right? When someone offers us money to do what we love, take the booking. Easy peasy. But wait, there’s more! We all have our individual lives, and people we share those lives with. Partners, families, friends and children. We have not yet constructed the Beta Bunker, where we lock ourselves away from the world and do nothing but create music and eat pizza. (Brian speaks: That sounds pretty sweet, actually. Are we doing that?) (Hush, Brian. Go do your homework.)  So what happens when a potential booking, with all the good stuff that goes along with it, conflicts with, say, an anniversary? Or a birthday? Or a school play? Tough choices need to be made. And we really sweated this one. It was a big deal, and we only made it bigger in our own minds. It became this epic clash of wills, certain to end only in disaster and ruin. Then someone suggested, “hey, why don’t we ask the person that this actually affects, maybe see what they think?”  We looked at each other for a moment, slack-jawed. Did we actually forget to do that? We made inquiry. Turns out, it wasn’t a thing. Not even a little bit. Their sole complaint was that they were bummed that they couldn’t attend our thing. So yeah, a whole week of perfectly good angst, totally wasted.

So, we’ve talked about recording. We need to do it. And I think we’re ready, musically speaking. We’ve got some original stuff that’s burning a hole in our brains, some material that we think we do well enough that we’re willing to pay the licensing fees. Our sound has really come together. It’s time. In the music business, until you’ve actually recorded, put something out there, you don’t really exist. We’d like to exist, we really would. So we’ve been exploring some options.

We tried to self-record, using the equipment we already have for live performances.  We set up in Paul’s living room, and spent the whole day trying to record 2 pieces. We started by all playing together, 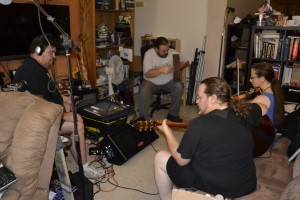 then each of recording our track separately while listening to the original collaboration. The theory was, this would allow us to edit individual tracks (guitar, fiddle, etc.) 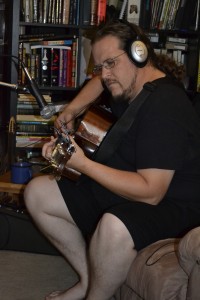 It didn’t sound *bad*, per se. But it didn’t sound great, either.And because we recorded each track separately, they were asynchronous; little differences in each track added up to being unable to mix it properly. We learned a bit, but it didn’t produce a worthwhile product. We had fun, though.

Brian’s taking a class in studio recording. It’s an Intro class, very basic, but he’s already picked up a lot of information. For example, he can now define the word “asynchronous”… He also has learned a lot about different types of microphones, and ways that they can be used, and signal processing, and acoustic treatment, and we recorded a couple of tracks as part of a class project, 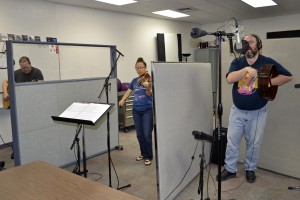 and targeted vs.ambient recording, and the rudiments of mixing, and…what? Oh, yeah, we recorded a couple of tracks in his class. 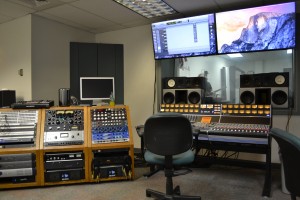 But that’s still a ways out. We need to record our music in order to generate revenue, but we need money in order to record…ACK! A lot of our very tight budget already goes into just maintaining our current position, treading water and hoping the waves don’t get too big. We’re trying to make some cash with the merchandise, but those are much less sale-able without a recorded product available. We’re looking into some crowdfunding options like Patreon and Kickstarter and Indiegogo, but again, we need something recorded to jumpstart those things. It’s a grand puzzle.

But we’ll figure it out. Stick around and see how we manage it. And if you have any suggestions, or bags of cash lying around, let us know! In the mean time, you should check us out  live! We’re playing Mesa 2nd Friday again, on November 13th, from 6:30-9:30 PM. Then, on the 14th, (Happy Birthday, Brian!) we’re playing the Grand Re-Opening of Kidneypuncher Vape Shop in Mesa from 2-4 PM, followed by a quick stop at the SoZo Coffeehouse Open Mic Night! And on the 28th, the Saturday after Thanksgiving, we’re at SoZo once again, this time for the whole evening, from 7:30-9:30! Details on the Bookings page.

...and that makes us mighty, indeed.